Heading into last Tuesday’s mid-term election, there was plenty at stake for the future of health reform (HBO’s John Oliver tried to warn us), particularly in states that have refused or have yet to decide whether to implement the optional Medicaid expansion—or had decided, like Kentucky, to opt in, not because the political winds were blowing in that direction, but thanks to Governor Steve Beshear’s bold executive order. In view of Kentucky’s many successes on the ACA—the second largest drop in uninsured residents, a robust state-based exchange, and its distinction as the only southeastern state to opt in to Medicaid expansion—Tea Party Republican Matt Bevin’s gubernatorial win last Tuesday on an anti-Obamacare, anti-Medicaid expansion platform came as something of a shock, […] Read More 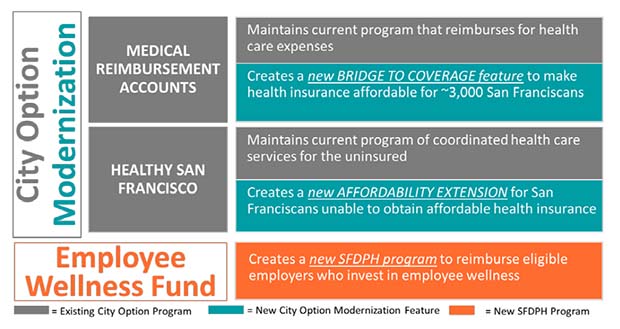 This blog was written by Rose Auguste and Judi Hilman of Health Access. Graphic courtesy of San Francisco Department of Public Health. On Tuesday, August 4th San Francisco’s Health Commission authorized the first major upgrades to Healthy San Francisco and City Option, the main platforms for universal coverage in San Francisco, since full implementation of the Affordable Care Act (ACA). Under the resolution, adopted with unanimous support, an estimated 3,000 additional residents will be able to use their Medical Reimbursement Accounts, one of the key components of Healthy SF, to subsidize Covered California insurance up to income levels exceeding the ACA limits. These additional subsidies would be available to households up to 500% of the federal poverty level (FPL), which […] Read More

This year’s ITUP gathering, fittingly dedicated to Peter Harbage, featured many key insights and “take homes” for advocates. Rather than lament the absence of consumer voices from any of the plenary and workshop sessions, here’s our report with comment and reflection on most of the sessions in italics. Actionable News from Covered California Covered California Director Peter Lee announced that 474,000 Californians have newly enrolled in coverage in the second open enrollment period that ended Sunday–and expressed confidence that Covered California would meet the 500,000 target when stragglers are brought in and the final numbers are tallied. But just to be sure and to compensate for the long wait times to get help enrolling by phone (800-300-1506), open enrollment has been extended through Sunday, […] Read More

Our friends in Colorado have begun a campaign called, “Thanks, ObamaCare!” to reclaim the term that opponents of the federal health law have used. They have a nifty website, and this really neat video: Health Access California promotes quality, affordable health care for all Californians.

Our friends in Minnesota have a Halloween-themed video encouraging people to pay attention to the Supercommittee, which will be making decisions on Medicaid, Medicare, and Social Security: Health Access California promotes quality, affordable health care for all Californians.

Tomorrow, the HHS Network, including Health Access California, is having a rally at 12 noon on the North Steps of the Capitol to spotlight the steep cuts in health and human services in the proposed California budget. Later that evening, at 5:30 on the West Steps of the Capitol, there will be another rally, protesting a budget bill in Wisconsin, in solidarity with the thousands who have been voicing their opposition in Madison and around that state. In particular, they have been outraged at an attempt to use a budget crisis as a way to circumvent the collective bargaining rights of the unions of teachers, nurses, and other public workers. The unions have already said they are willing to concede […] Read More

When in DC this week, I was with health and consumer advocates from other states, including from Texas, which recently has made news considering withdrawing from the Medicaid program–something that is unlikely but sort of shocking just to think about. Suzy Khimm of Mother Jones magazine, guest-posting on Ezra Klein’s Washington Post blog, has been all over this story, asking what if states ditch Medicaid? Tough budget times mean people look at extreme options, and California has not been immune–remember Governor Schwarzenegger proposed eliminating California’s state child health insurance program, Healthy Families, as well as dramatically scaling back Medi-Cal coverage for millions of Californians. But those options were rejected by the Legislature for what they were–extreme, absurd, unworkable, costly, and […] Read More

Here’s a statement by Richard Kirsch, National Campaign Manager, Health Care for America Now: “Health Care for America Now is committed to winning a guarantee of good, affordable health care we all can count on, and we will continue to push aggressively to get the best health care reform bill possible to the President’s desk for his signature as quickly as possible.Tuesday’s vote was not a referendum on health care reform. It was a referendum on a particular candidate in a climate in which people, hard pressed by the economy, are impatient for change. When it comes to the need to make good health care affordable, nothing is different today than it was yesterday. Congress must keep going and finish […] Read More

Can we hear from folks in Massachusetts? First of all, it isn’t news that Bay State voters have the ability to pull the lever for the GOP. Before the current Governor, the last Democrat in the statehouse in Boston was Michael Dukakis, when I entered college at Amherst a generation ago. Since then, Republicans have run the state for the last 17 of 20 years. So here’s a perspective from our friends at Health Care for All-Massachusetts, who report that hardly any of the ads focus on health reform, and there was a lot more going on. Health Access California promotes quality, affordable health care for all Californians.