Yesterday, the California State Assembly and State Senate voted to pass a 2021-2022 state budget that includes funding for a more universal, equitable, and affordable, health care system. While the Legislature is in agreement on this version of the budget, negotiations continue with Governor Newsom on a final deal. On June 1, the state legislature announced a joint budget proposal that aligned on a number of key health care proposals, which is what was passed today. It includes historic investments in our health system, including a plan for the first-in-the-nation end to the exclusion of income-eligible undocumented adults age 50 and over in Medi-Cal. The Governor’s May Revision included a proposal to end this exclusion for those 60 and over. […] Read More

Adopted by the Health Access California board Health Access California supports the Black Lives Matters movement, and stands with those in the streets to protest unacceptable police violence, and structural racism targeted at the Black community. Responding to the Black Lives Matter movement, and building upon our previous organizational statement, Health Access recommits to the work of advancing racial equity and ensuring racism is addressed as a public health crisis. It is our responsibility to work to abolish racism on a personal, structural, and institutional level, including in our health care system. As a leader in the movement for universal access to health care, we will work to counter the state-sanctioned violence and more broadly the anti-black racism that impacts […] Read More 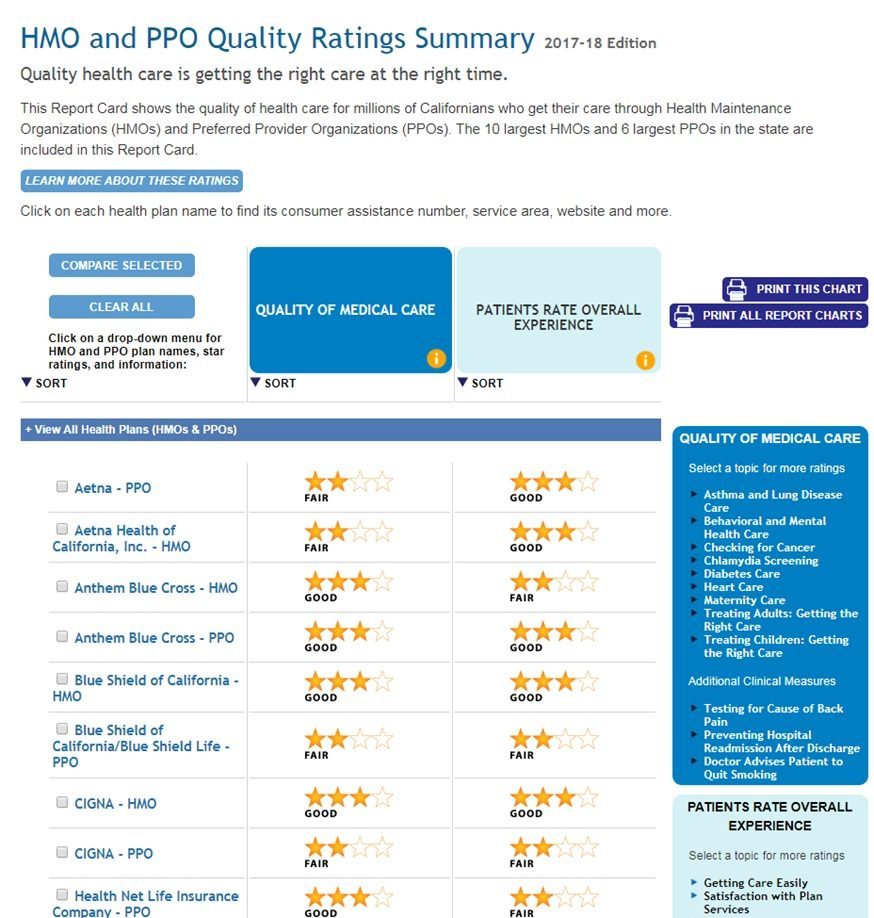 The California Office of the Patient Advocate (OPA) has released its 2017-18 Health Care Quality Report Card, a tool that helps consumers compare the quality of health plans and find information to help them get the care they need. With California’s Open Enrollment starting November 1st and continuing until January 31, 2018, consumers can evaluate the health plan and medical group options in their county and see how they fare on a variety of quality measures. The tool helps consumers shopping for coverage through Covered California or with employer-based coverage make decisions not just based on how much the health plan costs, but also whether they provide the best care based on your medical needs. With this report card consumers […] Read More

The Legislature and the Governor have reached a budget deal! The Budget Conference Committee convened on Thursday night to take final action on budget issues in Conference Committee, which is described below. See how health priorities fared in our budget scorecard. The revised budget includes several limited but important investments in health and human services, including in child care, housing, and other areas. In particular, the budget including the long-sought repeal of the Maximum Family Grant Rule in CalWORKS. The budget deal repeals the Maximum Family Grant rule in CalWORKS, a racist and punitive policy that puts families deeper into poverty. Health Access congratulates our allies in the health and human services community for this long overdue victory! On health care […] Read More

We wanted to spotlight two of the recent Health Wonk Reviews, a biweekly compendium of the best from the health policy blogosphere. Last week, Charles Gaba at ACAsignups.net (the best place to track Obamacare enrollment nationally) had a very California-heavy edition, with posts about Covered California’s quality initiatives, our death-with-dignity law, and our post about anti-tobacco activity. Also directly relevant to the current debate in the California legislature is a post from Louise Norris at Colorado Health Insurance Insider about the recent Florida legislation against surprise medical bills. The previous edition, David Williams at Health Business Blog featured our post on health plan mergers. Expect a new edition later this week by Jaan Sidorov at The Population Health Blog.

The Affordable Care Act, President Obama’s signature achievement, turns six today, March 23, in the heat of the most contentious and divisive presidential campaigns in recent memory. In the presidential race we see the usual partisan divide with the Democrats wanting to either build on it (Clinton) or move to single-payer health care (Sanders), and the Republicans vowing to repeal and replace it with “something that’s going to be terrific” or not replace it at all. Partisanship apparently comes first in candidates’ positions on the Affordable Care Act, ignoring the law’s results or objective markers of success. The same is true for some members of the California Congressional Delegation, despite the state’s stellar results from the ACA. Fourteen members voted to repeal […] Read More

On March, 4, 2016, the Department of Managed Health Care (DMHC) held a public meeting on the proposed takeover of Cigna by Anthem Blue Cross. The public meeting was requested by consumer groups including Health Access, Consumers Union, and others to raise questions about the structure of the deal, its potential impact on California’s patients and health care systems, and ensure proper oversight as insurance companies merge and become larger. The proposed Anthem Blue Cross-Cigna merger is one of three pending insurer mergers being reviewed by DMHC. Late last year, DMHC approved a merger between Blue Shield and Care1st, following Health Access’ and other consumer groups’ requests for strong conditions to address potential negative impacts. Health Access is also monitoring the proposed Centene-Health […] Read More

As part of California’s ongoing efforts to implement and improve upon health reform, last Tuesday Covered California and the California Department of Health Care Services convened an exploratory discussion of options for California under Section 1332 of the Affordable Care Act (see the panelists’ slide deck and all materials here). Under Section 1332, states may seek a waiver from the federal government to pursue innovative approaches to achieving the primary goals of the ACA. To qualify for consideration under Sec 1332, proposal(s) should cover at least the same number of people with the same level of benefits and affordability and consumer protections and without increasing the federal deficit. Recent federal guidance clarifying the Section 1332 option limits the state’s options even […] Read More

This blog was written by Tam M. Ma (Policy Counsel) and Judi Hilman (Director of Special Projects) DHCS held its quarterly Stakeholder Advisory Committee today, the first time since California’s Medi-Cal 2020 waiver was approved at the end of December, covering a range of topics, including the waiver renewal, SB 75 implementation of Health for Kids, and other Medi-Cal care transformation initiatives. Medi-Cal 2020 Waiver Details from the Special Terms and Conditions Medi-Cal Director Mari Cantwell provided an overview of the new waiver (See our earlier blog overview of the new waiver) and an update on implementation efforts. The Medi-Cal 2020 waiver provides more than $6.2 billion in new federal funding through programs that shift the focus away from hospital-based […] Read More

Thursday’s Covered California Board meeting, the first since the last day of open enrollment 2013, offered a deep dive on the standardized benefit designs and the quality/equity framework that will guide contracting with insurers for the next 3-year cycle (2017-2019), and a heated discussion about the new documentation requirements that insurers are calling for to qualify as a SEP enrollment. Executive Director Report Covered CA Peter Lee shared observations about OE3 and the second renewal period: With 440,000 new enrollees and a decent number choosing new plans in renewal, competition and shopping tools seem to be working. Take up by diverse and subsidy-eligible populations affirms Covered CA’s more targeted approach to marketing and outreach. Even better for the risk mix and therefore […] Read More