No state has more at stake in the Affordable Care Act than California. That’s a point that I made in a recent Sacramento Bee op-ed right after the Supreme Court ruling, and in other media.

This chart explains why: 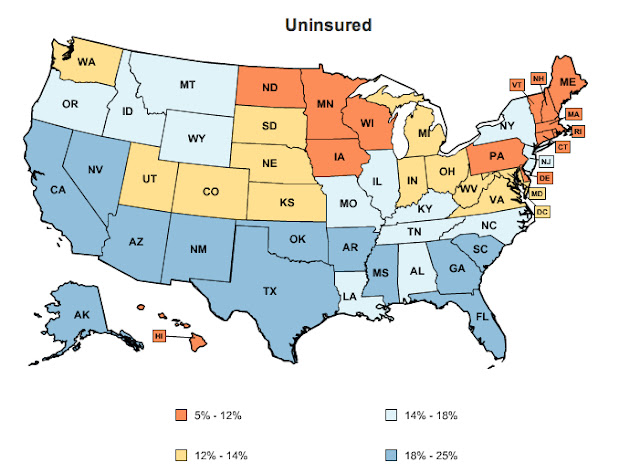 Yet while there are only a handful of states worse off in terms of our health coverage systems (Census Bureau stats put California 6th or 7th from bottom), California is the only one aggressively taking advantage of the benefits of the law to address these problems. On the map, virtually all the other dozen states with well-above-average uninsured rates are currently led by Republican Governors reluctant or antagonistic to “Obamacare.”

Among all states, California is a leader in maximizing the benefits of the law–one example is the early expansion of Medicaid, as reported by the Washington Post where California is just one of five states, covering over 400,000 over the half-million now covered by that provision. We are objectively leading, even compared to states that are trailblazing in their own way, from Oregon to Maryland.

It doesn’t matter whether California is “red” or “blue.” This work provides real benefits to real people, even in Republican areas like Orange County, that would be lost if repealed.

But California is unique, as a “blue” state with “red” problems. As we stated in a national NPR Morning Edition story by Pauline Bartolone, if we can show the benefits of the Affordable Care Act, here in a state of this size, this diversity, and with this scope of a problem, then that can be a powerful example to get other states to follow suit.

Implementing the Affordable Care Care right will benefit millions here in California–but our impact can go well beyond that.