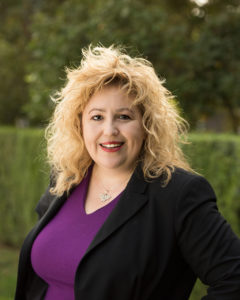 In early 2008, before there was an Affordable Care Act or even a clear indication of who the candidates for President would be, Health Access joined the national effort to pass comprehensive health reform: Health Care for American Now (HCAN). We knew we couldn’t win health reform with President Bush still in office, but we could lose the potential of reform under a new President unless we did the organizing and built the movement needed.

The campaign launched in July 2008 with 50 events across the country, with two of the most prominent OCCURING in California, featuring elected officials with history on health reform: then-Mayor Gavin Newsom in San Francisco and then-Lieutenant Governor John Garamendi in Los Angeles.

That major LA event was put together by a relatively new Health Access organizer, Nancy Gomez, who hit the ground running in her zeal to advocate for consumers. Nancy was the first in the country to get an elected official to sign the HCAN campaign’s “What Side Are You On?” pledge, from Rep. Henry Waxman, then chair of the Energy and Commerce Committee and a health care champion. Rep. Waxman went on to be a critical co-author of Affordable Care Act (ACA). 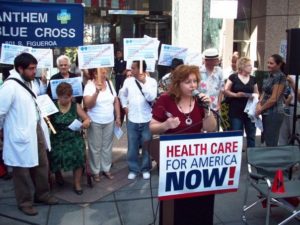 This was only the first of many organizing successes for Nancy. Now, after more than a decade advocating for health reform, Nancy is moving on from Health Access. We wish her the best, and will miss her.

Getting Chairman Waxman’s signature was just the beginning of her coordinating countless coalition meetings with elected officials, from Assemblymembers to state Senators to Congressional offices to County Supervisors and more, taking photos as she went even before “posting to social media” was the norm. She sometimes organized delegation visits so large that many couldn’t even fit into the room, like those following the passage of the ACA to thank the Congressmembers that supported it.

Voting for the ACA wasn’t an easy decision for most Congressmembers. You may remember the “tea party summer” of Fox News encouraging ACA opponents to attend Congressional town hall in 2009 that almost derailed the law’s passage. But you may not remember the rest of the story of that summer where health reformers responded with equal if not greater turnout at Congressional town halls. For example, Nancy helped to organize a town hall with the then relatively new Representative Adam Schiff which had to be moved outside into a parking lot to accommodate the estimated 4,000 people who showed up—and the ACA-proponents we helped turnout outnumbered the protesters. In the end, all California Democrats—even the seven self-proclaimed “Blue Dogs” like Schiff—voted for the ACA, a display of unity only one of the top-ten states showed. The California Congressmembers knew there was an organized health reform movement that had their back. 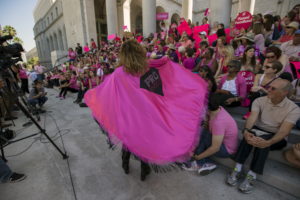 Over the last decade, Nancy organized countless press events and rallies not just in support of the ACA, and for the bills to implement and improve it in California, but also against state budget cuts to health and human services, and other state legislation to help improve our health care system. She worked to expand coverage to the uninsured and undocumented in Los Angeles (like Healthy Way LA and My Health LA) and through statewide campaigns (Health4All and Care4AllCA). She also led coalition press conferences and events to institute consumer protections against price-gouging by drug companies, insurers, and other providers. There were times when Nancy was behind the scenes, coordinating speakers, logistics, turnout, and more. Other times she was out front, often with an eye-popping prop. She was willing to wear a colorful costume or a cape for the cause, enjoying being in the battle to protect patients and the public. 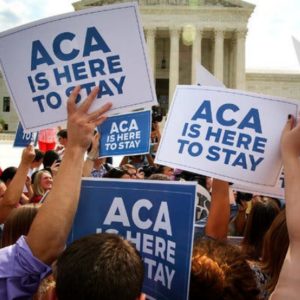 Right after the 2016 election, she organized one of the first protests in the nation to defend the ACA, bringing several hundred people to the front of LAC-USC hospital. She followed this up by MC’ing an even bigger rally a few months later – the week before President Trump’s inauguration – which featured our U.S. Senator Kamala Harris. Nancy appreciated the thank you letter from the Senator which joins the many others she has received from Congressmembers, state legislators and others who have appreciated her activism over the years. She understandably did not get a thank you card from after organizing a large rally in Bakersfield outside the office of then-Majority Leader Kevin McCarthy, one of the first at his office to pressure him to protect the ACA.

Nancy has also become a go-to resource for Los Angeles media on health policy issues, speaking with television, radio, electronic, and ethnic media many times over the years. She has been honored for her work with Spanish-language media, serving as a key spokesperson who could not just speak Spanish, but translate nuanced health policy. She played a critical role in educating Southern California about the importance of the ACA and health reform in general through hundreds of covenings, conference panels, and presentations, from Riverside to San Diego.

As she begins her next chapter, we thank her for her years of work for consumers, contributing to this remarkable run of health reform and history.

Watch slideshow below for more photos from Nancy’s time with Health Access: