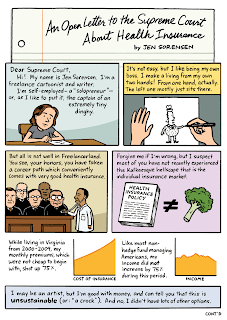 Welcome to June. This month brings the likelihood of a major Supreme Court decision on the Affordable Care Act (ACA), with major benefits at stake for hundreds of thousands of Californians and California’s health system as a whole. Nearly a half-million Californians would lose their health insurance, and many more would lose financial assistance to be able to afford care and coverage. Millions more California families would find that their new options, benefits, and consumer protections would disappear.

The Supreme Court should and will uphold the Affordable Care Act as obviously constitutional. But if the Court strikes down the health law, it would be a radical and destabilizing step for the judiciary and a devastating blow to our health system. It would literally throw people in treatment off of coverage, and have devastating ripple effect throughout our health system and state. Hundreds of thousands of Californians could lose their health coverage. Over 10,000 Californians with pre-existing conditions would be dumped onto the mercy of the market, uninsured and uninsurable. Over 410,000 low-income Californians in federally-matched county ‘bridge to reform’ programs would find themselves on a bridge to nowhere.


California would also lose significant money–for example, just in the last year, the state has taken advantage of new funding opportunities from the federal government including $40,421,383 to fund the creation and operation of the Exchange; $210,100,000 to improve the community clinic safety net; $5,300,000 to review unreasonable insurance rate increases; and $85,500,000 to improve public and community health.


More than than, the state would lost the roughly $10 billion/year that it would get to expand its Medicaid program to cover another 2 million Californians–and a similar amount to its Exchange to provide subsidies to help low- and moderate-income California families to afford private coverage. All told, $124 billion in new federal support for health care, our health system, and our economy is at stake.


A recent report detailed all the work to already implement the Affordable Care Act, and explores the benefits of the law to specific California communities, and researched and written by key California consumer organizations, including the 100% Campaign, American Cancer Society, California Pan-Ethnic Health Network, California Women’s Agenda, Congress of California Seniors, Consumers Union, Greenlining Institute, as well as Health Access California which then compiled the report.


For a more personal perspective, check out this new, funny cartoon essay by Jen Sorenson that explains clearly what’s at stake for one freelancer subjected to the “Kafkaesque hellscape that is the individual market.”