We at Health Access, along with the wider California Capitol community and nationwide health care policy and consumer advocacy community, were saddened to hear yesterday that our dear colleague and friend Beth Abbott passed away this weekend. 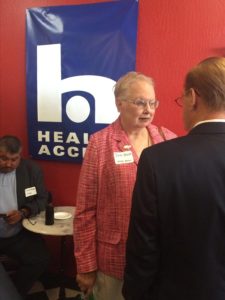 Beth served as the Director of Administrative Advocacy at Health Access California for nearly nine years, after a long and distinguished career in federal service, including as Regional Administrator for the Centers for Medicaid and Medicare Services. She left us when she was appointed by Governor Brown to direct the Office of the Patient Advocate. She retired (again) a few years ago, but was still active in the community. She was scheduled to be re-appointed to the Yolo County Health Council today; instead, the Yolo Board of Supervisors adjourned in her honor.

To use a Beth Abbott term, she was “deluxe,” both in her dedication to public service, and her personality. Tributes to her from colleagues and friends in just the last day have called her “a feisty firecracker and tenacious troublemaker,” “a bright light in the advocacy world,” a “great advocate, funny, warm and caring,” “not only brilliant but kind and thoughtful,” “generous with her time and sharing her wisdom and expertise,” ” a remarkable force of nature,” “a class act” and “a lot of fun.” “She had this incredible balance of being elegant and gracious yet relentless and tireless in her advocacy.” She was serious when needed, silly and sarcastic when appropriate, and we appreciated her and her anecdotes, told with flourish. Her husband Don Abbott, a retired professor of Rhetoric and English at UC Davis, informed us that she passed unexpectedly but peacefully in her sleep this Saturday. We will update this blog with any information about gatherings in her honor.

Beth has B.A. in psychology from the University of Redlands and has done graduate work in public administration at the University of Southern California. She already had one full life well lived when she retired after serving as the Regional Administrator of the Centers for Medicare and Medicaid Services (CMS), which serves the states of California, Arizona, Nevada, Hawaii, and the Far Pacific. In that role, she was responsible for the oversight of the Medicare and Medicaid programs, managed care plans, and the quality of care delivered in hospitals and nursing homes. The region serves over 10 million beneficiaries, and has a programmatic budget exceeding $30 billion per year. Before CMS, she worked for the Social Security Administration (SSA) in 17 field and regional offices in Massachusetts, Connecticut, Illinois, Indiana, and throughout California.

After a few years off, Beth was looking to continue to serve, and came to Health Access on a part-time basis to manage a project with our partners in senior advocacy, including the California Alliance for Retired Americans and the Congress of California Seniors, on the implementation of the Medicare Part D prescription drug benefit. I wondered how she would handle the transition from a federal administrator to a consumer advocate, and asked her during the interview if she would be OK working for a grassroots groups that held protests and even media stunts to make our points. In fact, I should not have worried:

Her new role suited her well, and she stayed with with Health Access for nearly nine years, serving as our Director of Administrative Advocacy since 2006, working on behalf of California consumers before state and federal agencies. She became a constant consumer advocate presence at many agencies, including the Department of Managed Health Care (DMHC), the Department of Health Care Services (DHCS), the Department of Insurance (CDI), the Managed Risk Medical Insurance Board (MRMIB), Covered California, and many more. As part of that work, she was one of 15 designated national health Consumer Representatives advising the National Association of Insurance Commissioners (NAIC) on the implementation of health care and insurance market reforms. I remember her work of dozens of conference calls at the NAIC to implement the medical loss ratio, helping influence the decisions there. She also served on the DMHC’s Financial Solvency Standards Board and other workgroups and task forces.

Among her many contributions, Beth co-authored a 2012 Health Access “secret shopper” report on how state health consumer assistance agencies fared when dealing with consumer calls. It was then appropriate when Governor Brown and HHS Secretary Diana Dooley tapped her, as one of California’s leading patient advocates, into his administration to run the agency that tracked consumer complaints.

Beth Abbott was appointed to lead a revamped Office of the Patient Advocate, in charge of publishing quality ratings and a report card on health insurers, and she took on new responsibilities collecting, tracking and reporting on data from state health consumer assistance agencies. Under those changes in state law, OPA’s major functions include health care quality report cards, with clinical performance and patient experience data for the state’s largest health plans and over 200 affiliated medical groups; compiling and reporting on how state health consumer assistance call centers are (or are not) helping patients, from the Department of Managed Health Care, Department of Insurance, Department of Health Care Services, and Covered California; and the development of model protocols for these call center agencies. She was interviewed on this blog about her good work, which she was proud of and got international attention. 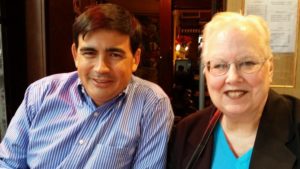 This picture was published in the Sacramento Business Journal during her appointment when she left Health Access, and the inside joke was that we provided that picture, which was actually taken in Paris, as our vacations overlapped. She often jokingly (?) lobbied me for a Health Access Paris office, one of the few times her advocacy was unsuccessful.

We send our condolences to her husband Don Abbott, and a whole community of people who respected and appreciated her, from her neighbors in Davis, her fellow public servants in state and federal service, and her health advocacy colleagues in the Health Access family, in California, and nationally. We will miss her.