This Saturday, I was pleased to speak about the Affordable Care Act at a symposium at Pasadena City College hosted by several chapters of both the League of Women Voters and Health Care for All California, entitled “California & National Health Care: Where Are We Now?” Other presenters included friends like Dr. Don McCanne, Dr. Bob Peck, and Dr. Bruce Hector of Physicians for a National Health Program, Doris Nelson of Health Care for All California, Joan Pirkle Smith who is on the board of Health Access California and UHCAN, and several others. 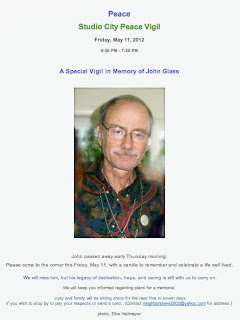 The event was special because it turned into a touching tribute for John Glass, a longtime activist for single-payer, and for heath reform and peace and social justice generally. John Glass passed away suddenly just this past week. This was a shock–I am many others were actually planning to see him at the Saturday event, and folks say he looking forward to it. It was the kind of event you would expect him to be at, since he seemed to be omnipresent in support of the good causes and fights.

In the ceremony, it was noted that key officials–former state Senator Sheila Kuehl, Representative Howard Berman, Los Angeles Mayor Antonio Villaragoisa reached out to the family. But it’s appropriate he was honored on Friday at a peace vigil and was featured on a leaflet (posted here)–because he always was passing out leaflets on the causes he cared about and was passionate about getting people involved in these issues.

We worked with John over the years–and he would remember and still have materials from the early days of Health Access over 20 years ago. We’ll miss John and his passion and activism.