Health Access was proud to join Governor Newsom for the bill’s signing, along with many of the health, consumer, senior, labor, and other groups that supported the bill throughout the legislative session, which together overcame well-financed opposition from prescription drug companies which sought to weaken the legislation. 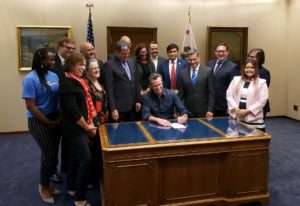 With Governor Newsom’s signing of AB 824, anti-competitive “pay-for-delay” practices by prescription drug companies will be under greater scrutiny. These harmful “pay-for-delay” deals occur when brand name pharmaceutical companies pay generic drug makers to slow down or stop lower-cost alternative medications from entering the marketplace. While this drives up profits for drug companies, consumers were being left to pay artificially high prescription drug costs. In 2010, the Federal Trade Commission estimated Americans pay $3.5 billion a year more for medications because of these “pay-for-delay” practices, and that figure has likely gone up significantly since that finding.

By signing AB 824, California consumers will see lower price alternatives come to the market sooner, easing the burden on people who need these medications to survive. It will be that much harder for brand-name and generic drug companies to engage in shady back-room deals that drive up their profit in secret, at the expense of consumers.

Governor Newsom’s signature also puts California at the forefront of efforts to prevent the problematic, price-gouging practices by prescription drug companies, and will hopefully provide momentum for further action that is desperately needed at the federal level. Consumers ultimately need Congress to act to lower drug prices for Americans, but California is leading the way.