Skip to content
HEALTH ACCESS UPDATE
Thursday, June 27, 2013
GOVERNOR BROWN SIGNS HISTORIC MEDI-CAL EXPANSION WITH STATE BUDGET
·         Over one million Californians will get new coverage under AB1x1, SB1x1 and the Affordable Care Act—and hundreds of thousands will find it easier to get on and stay on Medi-Cal coverage.
·        Key special session and budget trailer bills mean Medi-Cal coverage will improve, including restoration of most dental services for 3 million California adults in May 2014; Also enteral nutrition benefit restored, improvment of mental health and substance abuse coverage. Former foster youth will be covered.
·        Continued work needed in next 187 days to meet “Day One Challenge” for mass enrollment of coverage to maximize the benefit to our health system; to rollback cuts to both public and private safety-net providers, and continue our commitment to the remaining uninsured; and to fulfill the full promise of the ACA of better quality and lower cost.
LEGISLATIVE UPDATE: AB880(Gomez), to close “Walmart loophole” and to prevent large employers from shifting their health costs on Medi-Cal, stalls in Assembly with 46 votes. 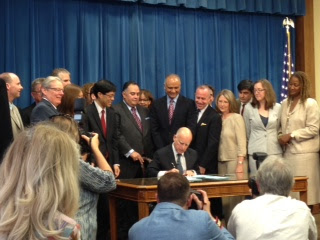 Earlier today, calling it a “big day for school kids, and a big day for Californians who don’t have health care,” Governor Jerry Brown signed the 2013-14 state budget along with historic legislation to expand Medi-Cal to over one million Californians, as well as key budget trailer bills that restore many dental services to over three million Californians and other key improvements in Medi-Cal.
In a signing ceremony in the Capitol, the Governor signed AB1x1 and SB1x1 which will transform Medi-Cal into a program that covers all low income citizens and legal residents below 133%/138% of the federal poverty level, regardless of whether they have children, disabilities or assets. Any low income citizen or legal resident who does not get affordable coverage on the job will be eligible for Medicaid.

About 1.4 million Californians will become eligible for Medi-Cal and millions of families that depend on Medi-Cal today should find it easier to enroll and stay enrolled as a result of the changes in federal law implemented in these bills.
AB1x1 (Speaker John A. Perez/Assemblyman Pan) and SB1x1 (Senator Ed Hernandez/Senate President Steinberg) take major steps toward implementing these changes:
MEETING THE DAY ONE CHALLENGE: By streamlining the eligibility process, and embracing “express lane” and automatic enrollment, the bills will ensure that California gets hundreds of thousands of Californians enrolled on day one, January 1, 2014. This includes over 600,000 Californians already enrolled in county-based Low-Income Health Programs, an early expansion of Medi-Cal, and hundreds of thousands more who are now in other health and human service programs.
BETTER COVERAGE: Together with the budget, the bills provide significant help for Californians without medical or dental coverage, preventing them from facing dramatic health and financial consequences, and assisting our health system and economy as a whole.

Under this budget, benefits would be improved in Medi-Cal, most notably by restoring most dental services that were cut in 2009 for 3 million adults, including: preventative care, examinations, floride treatments, restorations, crown, root canal therapy, full dentures and repairs, and emergency care. (Not included are partial dentures and other specific services.) This $77 million/year restoration, and a $13.6 million/year restoration of enteral nutrition benefits for patients who can’t chew will start in May 2013 for both existing and newly eligible Medi-Cal recipients. Finally, the budget improves mental health and substance abuse services to align with the ACA, at a cost of 66.7 million/year. Like other Medi-Cal benefits, the costs would be matched 50-50 by federal dollars, and starting in 2014, benefits for the over one million newly eligible will be 100% funded by the federal government.

A MORE INCLUSIVE MEDI-CAL: The budget also includes some eligibility changes to better take advantage of opportunities under the ACA, including extending coverage for former foster youth up to age 26 until January 1, 2014 when ACA coverage options kicks in ($3 million general fund), and extending Medi-Cal coverage for newly qualified legal immigrant parents (2.8 million), until wrap-around coverage is available for them in Covered California. Finally, the budget accepts dollars from The California Endowment, which will be matched by federal dollars, to total $53 million to support sustained outreach and enrollment in Medi-Cal coverage.

As HHS Secretary Diana Dooley said in a press briefing with consumer advocates afterwards, “President Obama made this possible but we have to make it practical in California.. We will take the most advantage possible of the opportunities the federal Affordable Care Act presents.”

“California has had a long tradition of recognizing the problems that result from health insecurity–people that are just one injury or illness away from bankruptcy.. This is a historic opportunity for people to have the security of knowing that they can get health care at an affordable price.” said Dooley. “There is a lot of work to do. We have been working very hard in the last two and a half years to be ready for the launch in January. This fall we will begin enrolling people, so the health security that Californians deserve and need is in their reach… We are committed as a community to make life better for many, many people in California.”

MORE TO DO: While celebrating the bills, and the leadership elements of the bills, health and consumer advocates agreed that there was more work to do, with now less than 100 days until open enrollment in coverage, and 187 days until January 1, 2014 when new ACA coverage options start.

Health and consumer advocates recommitted to revisit cuts to private and public health care providers, and to focus on supporting the safety-net to care for the remaining uninsured. For example, counties will now need to make decisions in the next few months on their commitment to the remaining uninsured, given the ACA expansions and the changes in the budget. Another outstanding issue is a 10% Medi-Cal provider rate from a previous budget year that is currently pending and could go into effect later this year. Advocates and providers will continue to work on this unfinished business.

LEGISLATIVE UPDATE: AB880(Gomez) was one bill considered on the Assembly floor today that would have helped raise funds for restoring Medi-Cal. The bill was to close the “Walmart loophole” that allows large employers to shift the health costs of their low-income workers onto taxpayer-funded programs like Medi-Cal. The bill, which would have required employers of over 500 workers to help pay for the health costs of their workers who go on Medi-Cal, stalled with 46 votes.

While the bill got a majority, it needed a 2/3 vote of the legislature. With no Republican votes in support, it needed every Democratic vote. Most Democrats voted for the bill, but Democratic Assemblymembers Brown of San Bernardino, Daly of Anaheim, and Gray of Merced voting no, and Assemblymembers Perea (Fresno), Bocanegra (Pacoima), Fox (Lancaster), Salas (Bakersfield), Muratsuchi (Torrance) held off from voting. AB880 was granted reconsideration, but because some legislators have been elected to other positions, it is expected to be some months before a 2/3 Democratic majority in the legislature will reappear.
Health Access California promotes quality, affordable health care for all Californians.