Today President Biden announced a federal framework for the Build Back Better proposal that includes historic investments to help Californians afford their health care, but does not include key proposals around prescription drug price reform and expanding Medicare dental and vision benefits. 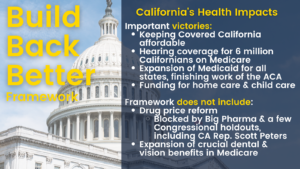 The framework includes the continued expansion of financial help in Covered California, providing annual assistance of hundreds or, for many, thousands of dollars to 1.4 million enrollees—help that is especially urgent in our high cost-of-living state. The health of millions of Californians would benefit from this assistance to afford coverage, have Medicare covering hearing aids, and other investments in home care, child care, and much more.

We are deeply disappointed that despite a broad popular support to have Medicare negotiate drug prices, it is not included in this framework. San Diegans should be angry that California’s Rep. Scott Peters and a few other holdouts have scuttled this rare opportunity to lower the cost of needed medication. By siding with Big Pharma, Rep. Peters and others hampered our ability to further expand Medicare benefits and make other needed investments. We have fought for prescription drug price reform for decades and we aren’t going to stop now.

Important victories that will help Californians and our health system include:

However, this framework falls far short in key areas that are critical to ensuring our health care system is affordable and equitable.

We will work to ensure that these key health care investments are passed by Congress, and keep up our advocacy to get permanent affordability assistance, prescription drug price reforms and Medicare benefit expansions included.

Learn more about what was originally proposed for Build Back Better in specific regions throughout the state: