Update on MCO (Managed Care Organization) Tax DHCS Director Jennifer Kent opened with an update on the MCO tax and the need to revise it to meet new federal guidelines to broaden the base to all health plans (learn more here).  Last Spring, the Governor called a special session to resolve this and related Medicaid financing issues—but the Legislature was not able during the regular session to strike a deal, as many had hoped. The Special Session will continue through the winter. Elizabeth Landsberg of Western Center on Law and Poverty noted the handful of Medi-Cal bills vetoed by Gov. Brown, as “collateral damage for the MCO tax.” “It’s poor people who pay the price” for delayed action on the MCO tax,” added […] Read More

Earlier today the California Senate voted 25-10, on a bipartisan basis, to pass legislation to prevent patients from facing surprise out-of-network medical bills after they receive care in in-network hospitals or other facilities. Sponsored by Health Access California, AB533 (Bonta) would protect patients from “surprise” bills from out-of-network doctors when they did the right thing by going to an in-network hospital or imaging center or other facility. Under AB 533, patients would only have to pay in-network cost sharing. This bill joins two other patient protection bills, passed earlier in the day, designed to prevent unfair out-of-pocket costs: SB 137 (Hernandez) an AB 339 (Gordon). AB 533 On Surprise Bills A recent survey by Consumers Union found 1 in 4 Californians received a […] Read More

Key patient protection bills hang in the balance this week, as Friday is the deadline for bills to pass from final floor votes in the California legislature to the Governor’s desk. In this last week of California’s legislative session, amendments have been taken on the key bills impacting health care consumers, but the substance of Health Access’ sponsored bills remains intact: to protect consumers from unfair out-of-pocket costs. SB 4 #Health4All has been scaled back to include mostly technical enrollment policy and process fixes related to covering all kids in Medi-Cal. Unfortunately, feedback from the Governor’s office has prompted bill author Senator Ricardo Lara to take out a key provision instructing the state to seek a section 1332 waiver to allow undocumented […] Read More

Yesterday, the Senate Appropriations Committee heard Health Access sponsored bill, AB 533 (Bonta) on “surprise billing” and select special session tobacco control bills. AB 533 (Bonta), which would protect consumers from surprise bills from out-of-network doctors when a consumer does the right thing by going to an in-network hospital, lab or imaging center was not voted on in committee, however, Health Access, the American Cancer Society and AARP testified in support of the bill before the bill was referred to the Senate Appropriations Suspense. The following special session tobacco control bills were also heard: • SB X2 8 (Lieu) – would require all schools to be tobacco free. • SB X2 7 (Hernandez) – would increase the age of sale for […] Read More

This week, the Assembly and Senate Health Committee as well as the Committees on Governmental Organization and Business and Professions heard a number of bills, including key health measures, including Medi-Cal Estate Recovery (SB 33), County Organized Health Systems (SB 260), Rate Review for Large Group Insurers (SB 546)–all passing out of committee. The big exceptions were tobacco related bills on E-Cigarettes (SB 140) and raising the smoking age (SB151). The debate around SB 140 (Leno) was perhaps one of the most contentious debates this week. The Assembly Governmental Organization offered Senator Leno four amendments, three of which Senator Leno agreed to, but one which he said would completely undermine the intent of his bill. The amendment which was the focus […] Read More

This afternoon, the Senate Budget Committee met to review details of the budget deal announced on Tuesday by Governor Brown, Assembly Speaker Toni Atkins, and Senate President Pro Tempore Kevin de León. Most notably, the agreed upon 2015-16 state budget includes a historic expansion of full-scope Medi-Cal for low-income children regardless of immigration status. While this major victory brings us one step closer to #Health4All Californians, the final budget included few other investments sought by health and human service advocates, including restorations to Medi-Cal benefits and rates.   Beyond coverage for all California children, other health augmentations included restoration of Denti-Cal reimbursement rates, and investments in public health programs around HIV and hepatitis C prevention.  For a summary of wins […] Read More

The Budget Conference Committee met this afternoon to take final action on items on the health agenda. Health advocates were pleased the actions taken to restore some benefits, improve provider rates, extend coverage to undocumented kids and lay the groundwork for covering adults, and invest in critical public health programs. The actions taken today represent agreements between the Senate and the Assembly only, and not with the Governor. Legislative leaders will be in conversation with the Governor in the coming days. The deadline to pass a state budget is Monday, June 15. See our previous blog post for details about health items on the Conference Committee Agenda. Full restoration of adult dental benefits: The Conference Committee voted to restore adult dental […] Read More

The Budget Conference Committee convened its first hearing today and health items were at the top of the committee’s agenda. The conference committee is chaired by Senator Leno and include Assemblywoman Shirley Weber (vice chair), Senators Ricardo Lara and Jim Nielsen, and Assemblymembers Richard Bloom and Melissa Melendez. The committee heard the items but left them open pending additional discussion over the next week. Here’s a report from Health Access’ policy counsel Tam Ma, with a description of each issue, the recommendation of Health Access, and the action of the Conference Committee CALIFORNIA HEALTH AND HUMAN SERVICES AGENCY MAGI Eligibility Rules The Affordable Care Act (ACA) established new rules for counting income and family size to determine eligibility for insurance affordability […] Read More

Last Friday was the deadline for all policy committees in the California legislature to hear and report on all bills with fiscal implications–and the good news is that many key bills of interest to health care consumers have passed their first critical hearing. While some bills stalled (including almost all of those Health Access opposed but also a few that advocates supported), bills moving forward include limits and protections against unfair out-of-pocket costs; efforts at greater transparency on cost and quality in our health system; and an expansion of access to coverage for all regardless of immigration status. For details on each bill, see our weekly bill matrix.  These bills still have a long path to final passage, including a June 5th […] Read More 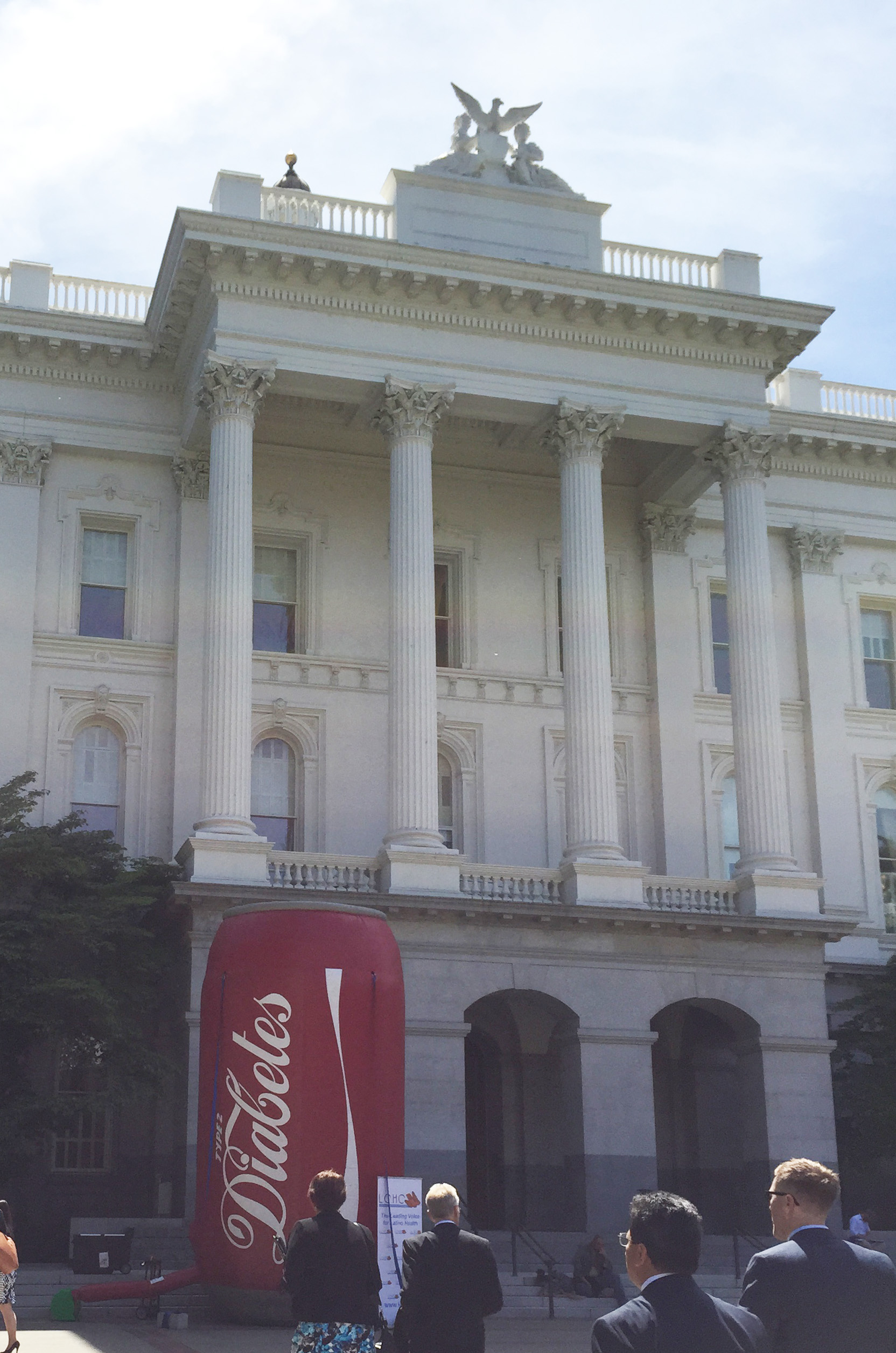 Yesterday the Senate Health Committee met for the last time before the May 1st deadline for all fiscal bills. Out of the 25 bills on the committee’s agenda, a handful that were of prime interest to Health Access and health care advocates.  These include: SB 203 (Monning) on sugar sweetened beverages safety warnings; SB 346 (Wieckowski) on hospital community benefits; SB 591 (Pan) on cigarette and tobacco tax; SB 675 (Liu) on health facilities and family caregivers; and SB 43 (Hernández) on health care coverage and essential health benefits. Following is our brief summary and analysis on each. All bills needed 5 votes to pass: SB203 (Monning), which would have required safety warning labels on sugar sweetened beverages, failed in committee with a […] Read More