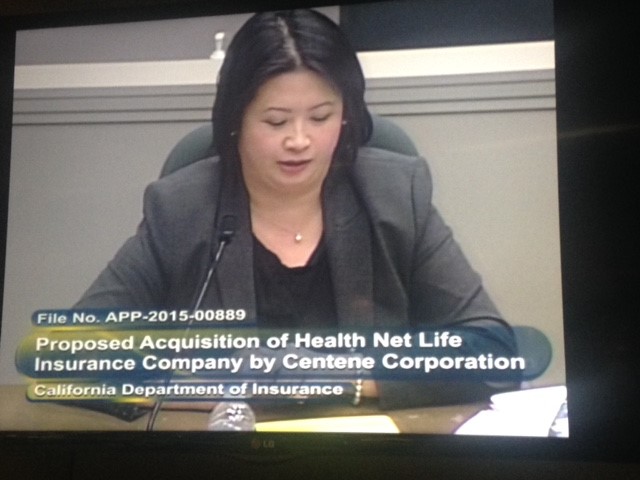 Consumer advocates are still skeptical about the proposed merger between Centene and Health Net after a six-hour long hearing about the transaction, where insurance company executives provided vague explanations of how consumers would benefit for the merger, but were unwilling to make any specific commitments to protect consumers. On Friday, January 22, California Department of Insurance (CDI) heard over six hours of testimony from insurance executives, consumer advocates and the public during an official hearing held at the Capitol. This hearing took place a month after a public meeting held by the Department of Managed Health Care (DMHC) on December 7, 2015.

The hearing began with Commissioner Jones giving a procedural overview and review of the agenda, followed by testimony by Centene and Health Net executives. Their testimony closely followed statements made in earlier public meetings, focusing on the supposed benefits and cost savings of integration, consolidation and increased market share, but with little contractual or enforceable assurances made to ensure consumers will benefit from this merger.

John Finston, General Counsel for the California Department of Insurance, cross-examined the insurance executives with a series of questions drawn heavily from comments and issues raised by consumer advocates, such as Health Net’s poor quality ratings, Centene’s commitment to staying and operating in California and the possible effects the merger would have on California-based staffing. Finston also asked a lot of questions about on Centene’s experience in Kentucky, where the insurer abruptly pulled out of the state’s Medicaid program in the middle of its three-year contract.

Throughout the cross-examination, Finston continually asked Centene for assurances and commitments regarding its operations in California, improving its consumer quality ratings and maintaining adequate provider directories. Centene would not commit to any specific assurances or actions to improve the consumer experience, but would only agree to ongoing conversations with the department to address those issues. These vague assurances were repeated by Centene throughout the hearing, with no specific or enforceable guarantees provided.

Finston also delved into the issue of executive compensation and bonuses due to the merger, which revealed that Health Net’s top executives will receive about $70 million in severance and stock options and sales. Both Finston and Commissioner Jones pressed Centene’s executives on their willingness to disclose the costs of the merger and ensure no costs are passed along to consumers or reflected in rate increases. Centene again expressed their willingness to discuss this with agency officials but refused to any binding agreement.

Commissioner Jones then raised key questions to Centene’s expert witnesses regarding the potential impact on consumer access and the health insurance market if Health Net exited the individual market and no longer offered insurance products in certain regions in Southern California, where Health Net has the largest market share. Centene’s expert witnesses continued to focus on the likelihood of that not happening, rather than the impact if it did. Commissioner Jones finally asked for enforceable or binding language in their documents—rather than just statements—committing them to staying in the commercial marketplace. Centene responded they did not have any binding language but, again, were willing to have conversations with the department about it.

After Commissioner Jones and General Counsel Finston finished their line of questioning, Richard Scheffler and Brent Fulton, two UC Berkeley professors, gave testimony about how insurer consolidation can affect health care market competition and how the Health Net-Centene merger can impact market concentration in different regions of California. Their review of the research demonstrates that health insurance mergers and consolidation is not beneficial for consumers and has led to higher prices for customers and higher profits for the insurers. Further, due to Health Net’s concentration of market share in certain regions in Southern California, an increase in market share could result in a narrowing of provider networks in those regions, thus reducing consumers’ access to care.

Afterwards, consumer advocates including Health Access California, Consumers Union, and Consumer Watchdog asked Centene’s executives a series of questions to regarding Centene’s commitments to get better as it gets bigger, if the merger is approved.

Tam Ma represented Health Access California and began her line of questioning focusing on why Centene is merging with Health Net and not just entering the market as a new entrant and providing additional plan options for consumers. She also asked how Centene planned to gain efficiencies and pass any savings along to consumers. Centene executives claim that by merging with Health Net, consumers will have access to more affordable health insurance options and they will able to offer these products into the future and remain competitive. Tam continued to press Centene, asking if consumers can expect to see savings through reduced premiums and cost sharing due to these savings. Centene again maintained the savings would be used to continue affordable plan options for its customers, but that other factors, such as health care costs, may continue to cause premiums to increase.  Health Access also focused on Centene’s commitment to maintaining accurate provider directories to comply with California law. Centene responded they are using their resources to find technological solutions maintaining its directories, participating in a pilot program with other insurers.

Representatives from Consumer Watchdog and Consumers Union also questioned Centene’s executives, continuing to ensure the consumer remained a focus of the hearing. Consumer Watchdog focused its line of questioning on Centene’s inadequate provider networks, patients who had subsequently received large out-of-network bills and sued Centene. She also asked about Centene’s commitment to continuing to offer plans in Southern California and its history of unreasonable rate increases. Centene only responded it would continue to have conversations with the department regarding these issues. Consumers Union asked for assurances from Centene to improve Health Net’s low quality ratings; which Centene replied it would commit the resources to do so.

After questions from the public and testimony from expert witnesses, consumer representatives from Health Access California, Consumers Watchdog and Consumers Union provided their testimony, which focused on many of the same issues discussed during the cross examination.

Representing Health Access California, Tam Ma shared our main concern for this and other mergers, which is whether California consumers, and our health system as a whole, will be better off. Tam focused on the lack of evidence that mergers result in higher quality or lower prices for consumers. She also continued to draw attention to Health Net’s poor track record as it relates to consumer protections and low patient satisfaction and quality scores. Further, Centene should be required to have a California-based medical director, legal counsel and regulatory compliance staff who are knowledgeable about California-specific consumer protections and other requirements the state places on all health insurers. Tam also urged Centene to promise to not proceed with rate increases that state regulators deem to be unreasonable.

Health Access and other consumer groups stated they were opposed to the merger unless it includes strong, enforceable conditions that ensure consumers are protected and benefit from these two companies getting bigger.

The Insurance Commissioner is keeping the record open and the public is welcome to submit comments regarding the merger by 5:00 PM on January 29, 2016. Comments should be sent to: Jennifer.chambers@insurance.ca.gov.

Health Access will continue to monitor and scrutinize the Centene/Health Net merger (and other mergers pending before state regulators) to ensure consumers benefit from the claims of greater efficiencies and cost savings.