The Kaiser Family Foundation has come out with a new tracking poll with some interesting trends about people’s perceptions of the Affordable Care Act.

The biggest finding is that a small percentage of those that will benefit from the law realize it. From KFF:

Although estimates are that 32 million uninsured Americans will gain coverage under the ACA, only about half of non-elderly Americans currently without coverage say they are familiar with the chief components in the law designed to achieve this goal. Perhaps because awareness of these coverage expansions is low, nearly half (47%) of the uninsured do not expect to be affected at all by the health reform law, either positively or negatively. But three in ten (31%) do say it will help them get health care. Fourteen percent expect to be hurt by the law, mainly because they worry they will be required to buy coverage they cannot afford. 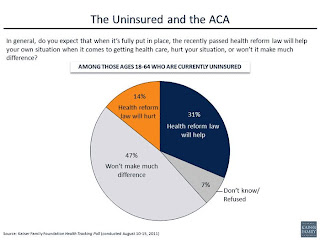 So we have a lot of work to do to educate people about the new law. Health Access California is sponsoring two bill that would help in the future: AB714 and AB792, which provides for information and automatic applications for those Californians in need of new coverage options. AB714 assists those attached to current programs, like those in FamilyPACT program, or those parents whose kids have Healthy Families coverage. AB792 provides this information at critical life events when people are likely to lose coverage, whether a job loss or a divorce. Both bills made their way through the Assembly, but are now two-year bills, awaiting final consideration by the Senate next year.

Drew Altman of KFF says its not about marketing, but about waiting until people actually see the full implementation in 2014. But we have to make that work–and that’s a much bigger job.

Overall, I’m not shocked of the findings: the debate over health reform provided more heat than light, and so it’s now the harder slog of implementation when people see the benefits in action, especially in 2014. We are seeing now that *both* support and opposition numbers are lessening. My guess it that what it really means is that people didn’t know what was in the Affordable Care Act to begin with–they just knew that in this polarized environment, they were supposed to be on one side or another–and with the attention on other issues, there’s an opening to get those who were opposed to take another look, and to get others to actually appreciate the specific benefits, as they come online.